The Space Academic Network (SPAN) comprises the heads, or equivalent, of the principal space research groups across the UK together with representatives from related organisations.

SPAN provides a voice for space-related research in the UK in the fields of Earth Observation, Space Engineering and Space Science. The group meets approximately three times per annum with representatives of the UK Space Agency, Research Councils and UK Space in attendance. Moreover, it acts proactively to coordinate a balanced response to current imperatives such as government or parliamentary consultations or more general issues.

SPAN is primarily concerned that the national and international infrastructure is ‘fit for purpose’ and that it works in a way that is as effective as possible. Therefore it advises on enabling mechanisms and processes, funding, the policy and practices of UK government, Research Councils, UK Space Agency policy, European Space Agency and the EU. Space research is a global activity and SPAN seeks to ensure the maximum benefit from international collaborations within and beyond Europe.

The purpose of the working groups is to permit in-depth discussion about their requirements in the future, outside of the board level of SPAN meetings. The idea is that it will help identify any specific challenges, opportunities, and gaps in funding, and might lead to the development of an academic strategy in this area. The conclusions can be taken to other bodies such as agency advisory groups or national centres for the more industry-academic or agency-academic meetings.

The use of technology in space and in support of space assets involves many novel challenges associated with the launch, environment and remoteness. Space Engineering addresses these issues and, like any other branch of engineering, brings forward new and novel technologies that enables our exploitation of space for both commercial and scientific benefit.

The ability to observe our planet from space has led to a huge growth in the understanding of our planet, its climate and its resources. Earth Observation covers all aspects of studying the Earth from space including the development of instrumentation, its operation and the processing, analysis, publication and application of its data.

Our understanding of the universe is enhanced by observing above the atmosphere and in the close proximity of celestial bodies (such as within a magnetosphere, on the surface of planets, near the Sun or in orbit around a comet). Space Science covers diverse subjects including Astronomy and Astrophysics, Planetary Science, Solar Physics and Solar-Terrestrial Physics. Space Science also includes the measurement of fundamental physical constants from space (such as the equivalence principle) and gravitational effects.

Data is King! We live in a time of “Big Data”, whether it is Petabytes of information generated from an experiment at CERN, or from the Gaia galactic survey, or from fusing data from multiple sources such as drones, aircraft, satellites and monitoring stations for air quality and environmental monitoring. How we collect, process, analyse and store data is key to making great progress. 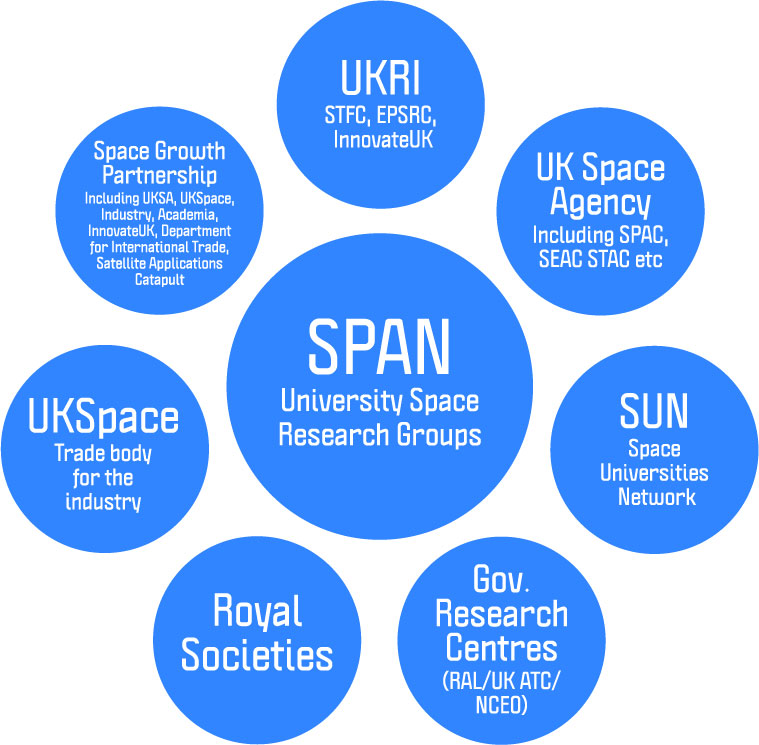 UKSA / SPAN online meeting is planned for the 1st of July from 3pm to 4pm. To participate, contact info@span.ac.uk

Academic institutions and research labs in the UK are invited to complete the survey which will be repeated on a two week cycle. The current survey runs until 11:30 pm on the 14th of June.

More than 70 attendees joined the webinar on the 2nd of June to hear from UKSA and SPAN what impacts the UK's space research organisations have been reporting in COVID-19 surveys. A recording of the webinar is available here and the questions and...

Read More |
We use cookies to ensure you get the best experience on our website. Learn more